7 Healing Herbs Found in the Kitchen

There is a quote that is attributed to Hippocrates the 5th century father of herbal medicine that goes "Let food be thy medicine and medicine be thy food", although some people believe that its a misquotation, whether it is or not, there is a lot of truth in the quote today with all that science continues to show us about the medicinal properties of herbs. Yet when most people step in to the kitchen to prepare the mint sauce that they will have with their Sunday lunch, they are doing it for flavour and not because they are aware of any medicinal benefits that mint in the mint sauce can provide.

When cooking, most of us know that a little basil will enhance the flavour of tomatoes and that sage can be a perfect partner for poultry dishes, and in kitchens across the world herbs are used to create flavour sensations and bring out the flavours of so many dishes, but what about the health boosting benefits of these herbs? Like spices, a topic we’ll visit soon, culinary herbs aren’t just flavour enhancers they have powerful health benefits such as antioxidant, anti-bacterial, digestive, diuretic and carminative properties, they can help to keep the memory sharp and calm an upset stomach, choosing the right combinations of herbs to add to your meals, really can result in food being your medicine. 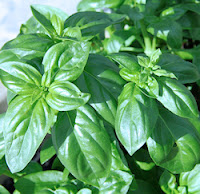 Basil contains compounds which help the stomach to digest food, gas - sometimes referred to as wind - is caused by undigested or poorly digested food, basil can help reduce intestinal gas and aid digestion. Scientists believe that the eugenol found in basil, that is also found in cloves is partly responsible for the digestive effect of basil, eugenol helps to ease muscle spasms.

As well as aiding the stomach to digest food basil also has antibacterial, antimicrobial, antidepressant, antioxidant, anti-rheumatic, antispasmodic, aromatic, carminative, emmenagogue, galactogogue, ophthalmic, stomachic and tonic properties. Basil oil mixed with Sweet Orange oil was subject to a study in 2012 on the effectiveness of anti-microbial formulations for acne, with improvements to the skin of up to 75% in those taking part.

The herb contains volatile oils including linalool which has insect repelling properties and methyl chavicol which is being studied for its hepatotoxic properties. Flavonoids including cineole and methyl cinnamate help to generate the balsamic, cinnamon like aroma of basil. Organic compounds present include rosmarinic acid which is being studied worldwide for its antiviral, antibacterial, antioxidant and anti-inflammatory properties. 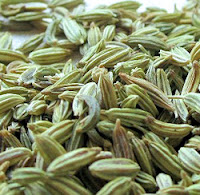 Fennel also contains anisic aldehyde a compound that is very similar in composition to the vanillin found in vanilla, both chemicals are disliked by insects such as mosquitos. The seeds also contain antioxidant, anti-viral and anti-inflammatory flavonoids including glucuronide, quercetin and rutin. The seeds also contain polysaccharides, tannins, resin, minerals including calcium, copper, magnesium, manganese and phosphorus, and vitamins including A, B1, B2, B3, B6 and C.

The seeds and extract are used by herbalists to relieve intestinal spasms or cramps due to its carminative properties, more recently studies have linked fennel with the ability to reduce pain, cramps, and duration of dysmenorrhea and give a reduction in symptoms. The carminative properties of fennel helps it to ease bloating, wind, and digestive spasms in the small and large intestines, sipping a mug of fennel tea can may prove beneficial to people with digestive upsets. Fennel has also been used to help eradicate bad breath, especially if the problem causing the bad breath is coming from the intestines. 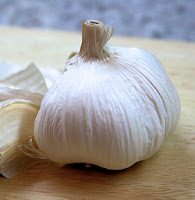 Chemically garlic contains many useful volatile oils including allinin, which converts from allicin a sulphur rich organic compound found in garlic which is currently undergoing studies for its potential anti-thrombotic and anti-inflammatory properties. Garlic contains and rich source of vitamins including A, B, C and E and minerals including, calcium, copper, iron and selenium.

The polyphenol content in garlic is responsible for its antioxidant properties one such polyphenol contained in garlic is allixin which is being studied in relation to developing drugs for the treatment of neurodegenerative disorders of the brain. Plant sugars including myrosinase are also found in garlic. Proteins, lipids, amino acids are also found in garlic, as are sulphur compounds which are also found in other members of the allium and mustard families, in garlic sulphur compounds include antioxidant ajoene, allylpropl which is one of the constituents that make eyes water when garlic and onions are cut, and sallylcysteine which is currently undergoing research for its potential to lower cholesterol levels.

A new study looking at Garlic for Hypertension, published in March of 2015 by the China Academy of Chinese Medical Sciences in Beijing, looked at garlic’s ability to reduce blood pressure and to evaluate the efficacy of garlic in hypertensive patients concluded that “…garlic is an effective and safe approach for hypertension.” 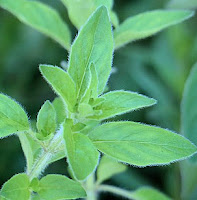 Marjoram is a close relative of oregano and has a host of beneficial properties including: - Analgesic, anaphrodisiac, anti-inflammatory, antiseptic, antispasmodic, carminative, cholagogue, diaphoretic, digestive, disinfectant, emmenagogue, expectorant, hypotensive, sedative, stimulant, stomachic, tonic and vasodilating.
It contains monoterpenes including borneol, linalool, sabinene hydrate and terpineol, all of which have antiseptic and anti-viral properties.

Other monoterpenes include carvacrol at around 50%, which can help to inhibit the growth of bacteria, which is why it’s often added to foods to help prevent bacterial contamination. Pinene which is a natural insect repellent, sabinene is also present and contributes to the spicy note to the fragrance of marjoram.

Marjoram also contains bioflavonoids including caffeic acid, which has shown to have immunomodulatory and anti-inflammatory properties in laboratory tests. Rosmarinic acid, another bioflavonoid found in marjoram also has an ant-inflammatory action and like caffeic acid has antioxidant properties. A recent study into ‘The effect of Marjoram (Origanum majorana) Tea on the Hormonal Profile of Women with Polycystic Ovary Syndrome’ published by the Department of Nutrition and Food Technology, Jordan in February 2015 looked at how ‘in traditional medicine, marjoram is reputed for its ability to restore hormonal balance and to regulate the menstrual cycle.’ The study concluded that “the beneficial effects of marjoram tea on the hormonal profile of PCOS women because it was found to improve insulin sensitivity and reduce the levels of adrenal androgens.” 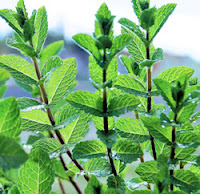 Peppermint is another aromatic herb which is often associated with its ability to soothe an upset stomach, the herb has a wealth of beneficial properties including: - Anodyne, antiseptic, antispasmodic, anti-inflammatory, anti-bacterial, anti-parasitic, aromatic, carminative, cholagogue, diaphoretic, refrigerant, stomachic, stimulant, tonic and vasodilating. Amongst its chemical constituents peppermint contains volatile oils including menthol which can be used as a topical analgesic to relieve minor aches and pains, like muscle cramps, sprains and headaches, it also gets added to decongestant formulas and remedies for dyspepsia. Peppermint also contains the flavonoids luteolin which has anti-inflammatory properties and rutin, another anti-inflammatory constituent that also has antioxidant properties.

Pulegone found in peppermint oil has insecticidal properties, as does the eucalyptol. Peppermint also contains phenolic acids which include rosmarinic acid which has anti-inflammatory properties and salicylic acid which also has anti-inflammatory as well as pain relieving properties, but products containing it should be avoided by people who are allergic to salicylates. Triterpenoids like ursolic acid are also present, ursolic acid is currently being studied for its potential use as a cardio-protective drug. Tannins, resins and a variety of vitamins including B complex and C and minerals including potassium, magnesium and selenium are also present.

Peppermint oil is stimulating to the senses, and as such it has recently been studied for its ability to improve exercise performance, in January 2014, researchers at the Department of Physical Education and Sports Sciences in Iran, published a study on the ‘Instant effects of peppermint essential oil on the physiological parameters and exercise performance.’ Results of the study ‘revealed significant improvement in all of the variables after oral administration of peppermint essential oil. Experimental group compared with control group showed an incremental and a significant increase in the grip force (36.1%), standing vertical jump (7.0%), and standing long jump (6.4%).’ 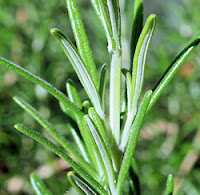 Rosemary is yet another wonderfully aromatic herb that has antiseptic properties, it also has antispasmodic, antiviral, aromatic, astringent, antioxidant, anti-inflammatory, cardiac, carminative, cholagogue, diaphoretic, emmenagogue, nervine, ophthalmic, stimulant, stomachic and tonic properties. Chemical constituents in rosemary include tannins, volatile oils of borneol which helps rosemary with its insect repelling properties and camphor which as well as being a repellent is also an antimicrobial. Rosemary also contains flavonoids, including apigenin which is a natural yellow dye that was once used to dye wool, it also contains disomin which is undergoing research for its potential to treat neurodegenerative diseases like Alzheimer's it also has anti-inflammatory properties.

Rosmarinic acid is found in rosemary, it was first identified as a chemical compound in 1958, it is found in many other plants of the lamiaceae family to which rosemary belongs, including basil, lemon balm and peppermint, the compound has antiviral, antibacterial, antioxidant and anti-inflammatory properties. The tritepenoid ursolic acid found in rosemary is used in the manufacture of some antitumor agents, other Triterpenoids found in rosemary include betulinic acid which is known for its anti-retroviral, anti-malarial, and anti-inflammatory properties. A recent study published in July 2015 by the Laboratory of Human and Animal Physiology in Greece and their partners looked at the consumption of Rosemary Tea and its ability to function as an anxiolytic and to have an anti-depressant like behaviour. 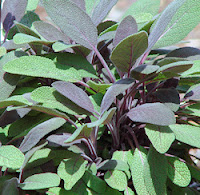 Sage, historically has a strong affinity with the mouth and throat and was used as a gargle for easing sore throats and as a means of treating tooth problems such as gingivitis. It was said to help the teeth and gums and became a popular ingredient in tooth powders of the 19th and early 20th centuries. Sage is prized in many cultures for its healing and medicinal properties, it has anti-bacterial, anti-diarrhoeal, anti-hydrotic, antiseptic, anti-spasmodic, aromatic, astringent, carminative, cholagogue, emmenagogue, galactofuge, stimulant, tonic and vasodilator properties. It’s also taken by many women approaching the menopause for helping to reduce night sweats and hot flushes.

Its chemical composition includes volatile oils, amongst them borneol which is a natural insect repellent and caryophyllene which has anti-inflammatory properties as well as being insect repelling. Sage also contains diterpenes and triterpenes, one of the major triterpenes is ursolic acid, which is being researched for its potential to induce apoptosis in certain types of cancer cells. Phenolic compounds in sage include rosmarinic acid which has antiviral, antibacterial, antioxidant and anti-inflammatory properties.

Sage is also rich in flavonoids, salvigenin has cytotoxic and immunomodulatory properties whilst hispidulin is anti-inflammatory and antioxidant. Glucosides, plant sterols and tannins are also present. Sage is also being linked to being able to potentially treat dementia and cognitive impairment due to its anti-inflammatory nature, a study published in June 2014 by the Department of Clinical and Experimental Medicine in Italy looked at ‘Salvia officinalis L. and Salvia lavandulaefolia L. which both have a longstanding use as traditional herbal remedies that can enhance memory and improve cognitive functions. Pharmacological actions of S. officinalis and S. lavandulaefolia on healthy subjects and on patients suffering of cognitive decline have been investigated. Aim of this review was to summarize published clinical trials assessing effectiveness and safety of S. officinalis and S. lavandulaefolia in the enhancement of cognitive performance in healthy subjects and neurodegenerative illnesses.’

Disclaimer: Whilst every effort has been made to source the most up to date and accurate information, we cannot guarantee that remedies in our articles are effective, when in doubt, consult your GP or a qualified Medicinal Herbalist. Remember also that herbal remedies can be dangerous under certain circumstances therefore you should always seek medical advice before self-treating with a homemade remedy, especially if you are pregnant, breast feeding or suffer from any known illness which could be adversely affected by self-treatment.
at September 07, 2018